Ever since our Harry Potter Family Movie Night Party a few years back I’ve been wanting to make Harry Potter costumes for the kids.  Well, not just the kids…for all of us!  This Halloween I made it happen, and created costumes for our family of six to represent the characters from Harry Potter!  I put together our costumes with both handmade and store bought items, along with a few borrowed pieces.  I’ll share how I made the costumes, but as for the the wands we carried, I have to give major props to Michael’s brother Nicholas.  He created a unique wand for each child, and a special wooden wand box with their initials for storage.  They were such a special gift for the kids…and fit perfectly with our Halloween plans!  I have a few pictures from our annual Halloween celebration to share with you, along with some how-to’s on our costumes.  Just in case any of you are planning Harry Potter costumes in the future!

Here’s the whole family as Harry Potter characters…Henry was Dobby the House Elf, Ella was Hermioine, Michael was Dumbledore, Sam was Ron Weasley, I was McGonagall and Max played the role of Harry Potter himself. 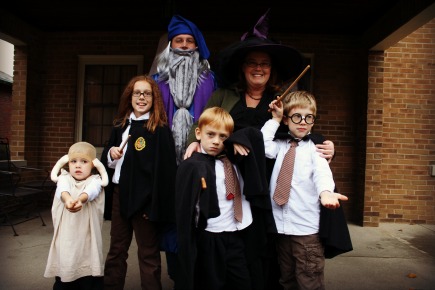 For Michael’s costume I went to Theatre House in Covington and bought a cheap slouch hat which I bedazzled with glitter stars (you can’t see them in the picture because I think he had the hat on backwards) and I bought him a cheap wig/beard combo.  He wore a blue graduation gown borrowed from cousins and a purple scarf.  My costume was just a black skirt with a sweater and a witch hat….I spent the least amount of time on my costume because I was so busy with the others.  I could have been more creative with mine.

For the Black Robes I used a super simple FREE online YouTube tutorial from FleeceFun.com.  The robes were really easy to make, but I wish I had hemmed around all of the edges so they wouldn’t have frayed.  The iron-on Hogwarts patches came from the Patch n Patterns Etsy Shop.

I made the ties using a pattern I bought at Sewn Studio, and I found maroon/golden striped fabric at Joann’s.  They wore the ties with their good white church shirts and solid pants.  For Ella’s hair we put it up in a bunch of tiny braids the night before Halloween and she slept in them and then….voila…crazy curly hair the next day. 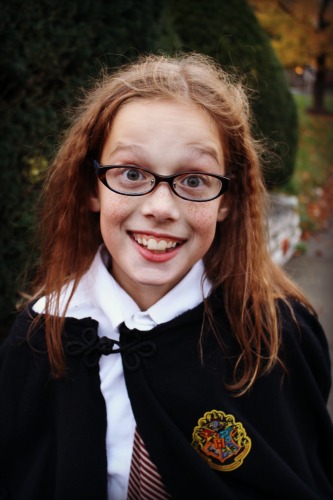 For the Dobby costume, I bought a cheap pillow case and cut arm/neck holes in it and then Ella made him felt ears based on this tutorial.  I bought the wig cap from “We Got it All” on Amazon. 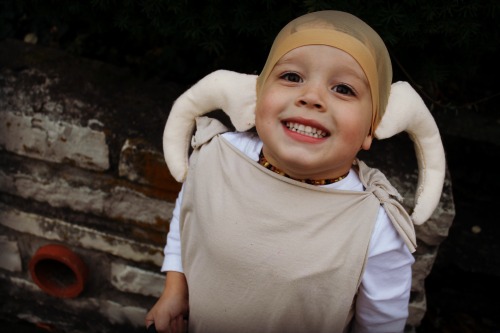 And then there’s the wands…how cool are these?!?!  I’m hoping some day my Brother in Law starts selling these on Etsy..wouldn’t they be a hit? 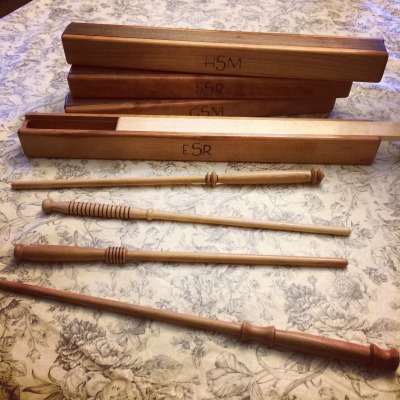 Here’s some more pictures from our Halloween Party :: 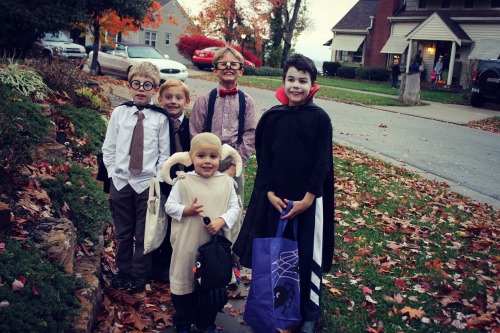 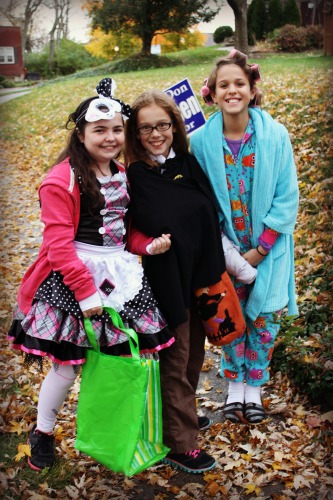 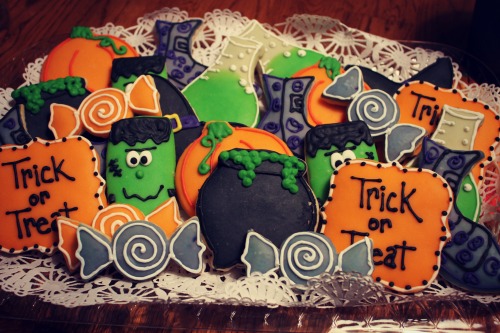 And as excited as I was about our family’s costumes this year, I do believe the costume prize of the night went to the Minion: 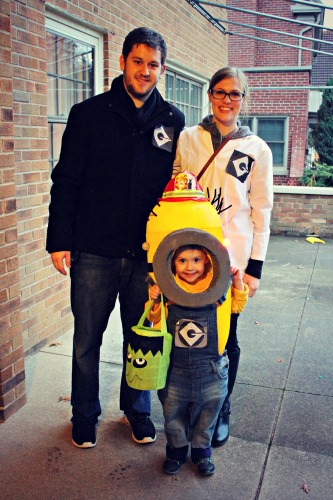 Does your family dress up together for Halloween, or is it just the kids?  I’d love to hear about your costumes in the comments below!