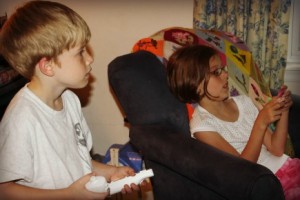 Do you ever feel like your kids are spending too much time in front of a screen? I do! The beginning of our summer was kind of crazy with sick kids, lots of work for Mama and a busy schedule. Soon I noticed they were vegging out in front of video games way too often. I needed to find a way to limit their time so I implemented some video game regulations. I don’t mind buying them elo boost so they progress in their game quicker, but they were definitely spending too long on video games a few months ago. Luckily that’s changed now!

During the school year the kids are only allowed to play video games on the weekends (and even then we limit their time), but since we are so busy with fun activities during the warmer months, even on the weekends, I decided that we needed a different rule during the summer. I decided to tell the kids that they are only allowed to play video games on rainy days. And even on rainy days I don’t allow them to play their games all day long, we have time limits. I remember a time where they used to show me sites like www.bestgamingchair.com in the hopes of persuading me to buy a gaming chair. I just said maybe when they get a little older. So I didn’t rule it out. Currently, they even set their own timers and stop when the timers buzz. This has been a perfect solution! Before all this, they even lo

It is important to take breaks from playing every so often. If you are struggling to get them to take breaks, try getting them to alternate between using the game console and a computer. You could get them to research about their favorite game, such as fortnite, on websites such as BattleRoyaleInsider.com. Learning is always positive, and they may be more inclined to embrace learning if it is about something they enjoy. Not only would it be a great way for them to learn about their favorite games, but sites like this often have guides, similar to this dota 2 mmr boosting site, that could help them to improve their rankings and skills.

I’ve noticed since we’ve implemented this rule that I have not been hearing the phrase “I’m bored” as often, surprisingly and the kids don’t seem to be squabbling as much. And they are not constantly whining to me that they want to play video games, because the guidelines are so clear. They are using their time more creatively….playing board games, exploring the backyard, creating things together with LEGOS, and so on. I really think the clear guidelines for video games has made things more peaceful.

I should note that I have made video game exceptions for long drives, and I have used video game time as a reward on occasion as well. For instance, I’ve struggled to get the boys to read this summer, so one day I told Max that for every book he read aloud to Sam they could have a set time for video games. This worked beautifully…they sweetly read books together for most of the day and then set timers for themselves for video games in between.

How do you regulate video game or screen time for your kids?