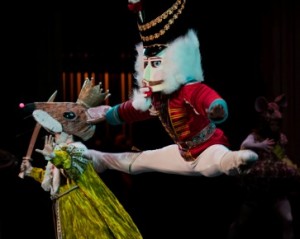 If you live in the Northern Kentucky or Cincinnati area chances are you have some holiday memories that revolve around “The Nutcracker”.  Maybe you went as a child and would like to go back, or perhaps you have never been but are enthralled by the music, or possibly you make this a holiday tradition and attend the show every year.  I have a chance for one lucky reader to witness the magic first hand this holiday season, thanks to the Cincinnati Ballet I have two tickets to see “The Nutcracker” presented by Frisch’s at the Aronoff Center for the Arts.

“The Nutcracker is the beloved holiday story of Clara, a little girl who embarks on a thrilling journey with her Nutcracker Prince through the Land of Sweets, meeting colorful and exciting characters along the way.”

I have been to see “The Nutcracker” a few times in my thirty-seven years, and each time I see it I’m filled with a child-like sense of wonder and excitement.  The show is just beautiful and an embodiment of the holiday season.  The Cincinnati Ballet company never fails to disappoint with their performance, and the set and costumes are always enchanting.  I took Ella in 2010 and she got to take part in the Sugar Plum Parade and meet the stars on stage and she was over the moon.  I can’t wait to take her again this year!  Read more about the show, and then enter the giveaway below and perhaps you’ll be joining us at the show!

Details About The Nutcracker ::

Frisch’s Presents The Nutcracker returns for its 40th Anniversary December 19 through 27 at the Aronoff Center for the Arts, accompanied by the Cincinnati Symphony Orchestra performing Tchaikovsky’s sensational score, conducted by Maestro Carmon DeLeone. The holiday favorite, presented since 1974, saw a re-envisioning in a 2011 world premiere, with new sets by John Ezell, costumes by Carrie Robbins, lighting by Trad A Burns and choreography by Artistic Director & CEO Victoria Morgan. 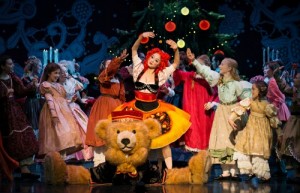 Frisch’s and Cincinnati Ballet have a long history of collaborating to present the spectacular production, dating back to the first Frisch’s Presents The Nutcracker in 1974. Frisch’s Restaurants Inc. championed that production through a generous donation and has sponsored the production every subsequent year, for 40 years. Frisch’s relationship with Frisch’s Presents The Nutcracker has never wavered, and they have been revered in the community as long standing advocates for the arts in Cincinnati.

International ballet dancers Venus Villa and Rolando Sarabia will be joining Cincinnati Ballet for several weeks this December to perform in The Nutcracker. Both Villa and Sarabia have enjoyed distinguished careers that have allowed them opportunities to dance all over the world. Villa is originally from Cuba and has danced with the Royal Ballet, the English National Ballet and Vienna Staatsoper Ballet. Sarabia, also from Cuba, is a gold medal winner at the International Ballet Competition in Jackson, Mississippi, as well as multiple other international competitions. They will be dancing the roles of the Snow King and Queen and the Sugar Plum Fairy and the Cavalier for select performances. Villa and Sarabia join us from Rome where they most recently appeared as guest artists with the Rome Opera Ballet in Don Quixote.

“It is exciting to have artists with us who have performed with major international ballet companies and who have a long history of guest performing the major classical works in Europe, Russia and South America,” says Victoria Morgan, Artisitic Director & CEO.

In celebration of its 40th Anniversary, Morgan has also invited four talented dancers from Elementz hip-hop studio to be featured as Mice in the battle scene of The Nutcracker. Elementz recently wowed audiences when they were invited to choreograph and perform their own piece in Cincinnati Ballet’s Kaplan New Works Series earlier this season, creating a unique juxtaposition of top ballet dancers performing on the same stage as Cincinnati’s number one hip-hop company. Morgan worked previously with Elementz resident choreographer Derrek Burbridge during the creation of King Arthur’s Camelot, to bring “fluidity and an edge” says Morgan, to the character of the villain Mordred.

SUGAR PLUM PARADE
The Sugar Plum Parade is an exciting opportunity for Tuesday, December 23 and Friday, December 26 matinee ticket holders to experience The Nutcracker from the stage itself. Audience members are invited to walk across the stage following the performance, getting a chance to see sets, costumes and dancers up close. 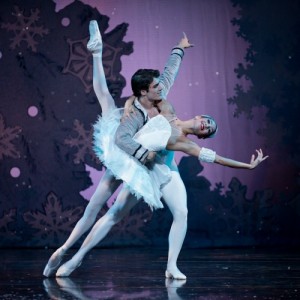 The Details ::
I have TWO TICKETS to see The Nutcracker at the Aronoff on Sunday, December 21st at 5:30pm.  I will draw one random winner on Wednesday, December 10th at  8pm.  The winner will be emailed and have 24 hours to contact me via email or another name will be drawn. I will mail you the tickets. Please be sure you are available on this date before entering the giveaway. 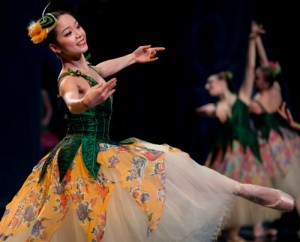 How to Enter (answer this question):1.  Why do you want to see the Nutcracker?

The following entries are optional BONUS entries!
IN ORDER FOR BONUS ENTRIES TO COUNT YOU MUST LEAVE A SEPARATE COMMENT FOR EACH ENTRY!
2. Check out  The Little Things Blog &  Cincinnati Ballet on Facebook, and then leave a comment below telling me that you did so.
3.  Share this giveaway with your friends on Facebook, and be sure to tag “the little things blog” and in your post!  Leave a comment telling me you shared.
4.  Tweet about the giveaway!  Make sure you add @LittleThingsMom and @CincyBallet  in your tweet!  And then comment below telling me you did so.
5.  Follow along…sign up for Email Newsletters for this blog (upper right hand corner of this blog) and then leave a comment telling me you did so.  Or if you follow along another way then tell me that.

Disclaimer: I was given tickets to give away as well as two tickets for my family to attend the show.  The opinions are 100% my own!