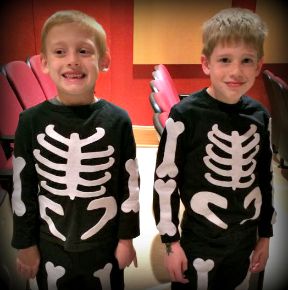 This year Sam and Max took part in their school play and I had the task of coming up with Skeleton Costumes for them.  I told the drama teacher that I’d find some DIY Skeleton Costumes that would be easy to make.  As soon as the words came out of my mouth I got nervous.  It was a busy time for me, with lots of substitute teaching jobs and other responsibilities I had committed myself to.

I panicked over the task at first, but a simple Google search for “DIY Skeleton Costumes” yielded great results.  I found a super simple DIY Skeleton Costume tutorial on Parents.com.  I put the costumes together during the Technical rehearsal for the play and they looked super cute in the show!  So if you need a simple Halloween costume or a skeleton costume for a school play check out this DIY Skeleton Costume Tutorial!  I used self-sticking felt to make the bones for these costumes, and they held up for the play performances, but if there had been more time I would have either sewn around the edges of the bones or used a stronger glue to make the costumes sturdier. 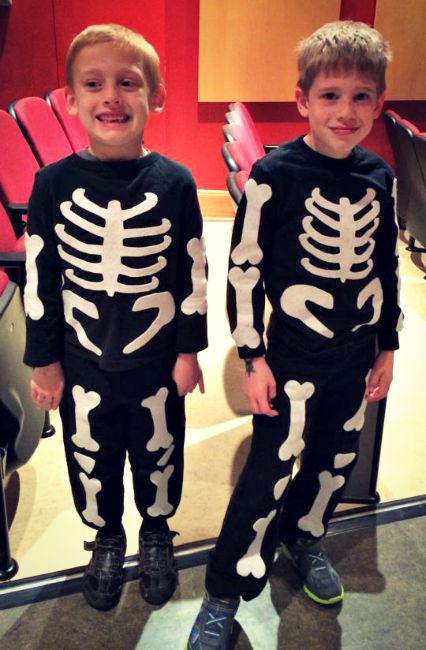 Disclaimer: Many thanks to Parents.com for having such awesome costume ideas!  This is not a sponsored post, I was just really excited about this cool costume idea!