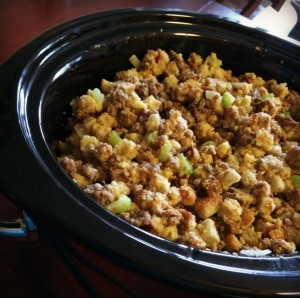 I have many many wonderful memories of my Nana, but one that stands out in my mind is her teaching me over the phone how to make her Thanksgiving Stuffing.  For some reason that year she wasn’t able to bring her famous stuffing for Thanksgiving dinner so I took it upon myself to figure out how to make it so that we could have it on the table.  Nana patiently talked me through each step over the phone as I took notes and made the stuffing.  I can still hear her voice in my head when I make it each year.  I miss my grandparents constantly, but especially around the holidays, so it’s special to have this memory and be able to put this dish on the table for our family.  And as the kids have grown they’ve started to help me put the Thanksgiving Stuffing together, so this recipe will be handed down to more generations as the years pass.

I can’t share Nana’s recipe, because it’s my own little family treasure, but I did find some other stuffing recipes to share with you (and one is much like Nana’s recipe).  There’s nothing about Nana’s Thanksgiving Stuffing recipe that makes it so different than many other traditional stuffing recipes.  What makes it special is the memory of the day it was handed down to me.  Do you have a recipe that is very special to you?   One that has been handed down through the generations? 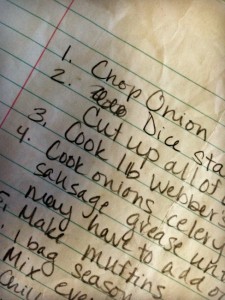 Sausage Herb Stuffing from Once Upon a Chef (this is the recipe that is most like my Nana’s…only with a bit of Corn Muffins mixed in!)

The Best Vegetarian Stuffing Ever from Epicurious – for the herbivores in the family.

World’s Best Cornbread Stuffing from the Food Network – I think Cornbread is what makes stuffing delish!

Sausage & Herb Stuffing from Ina Garten – traditional with a twist…this one has apples & cranberries in it!

Read this post to find out more about my obsession with collecting and giving family recipes.