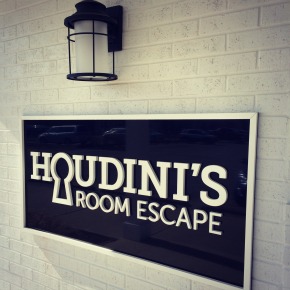 Recently I was invited to visit Houdini’s Room Escape in Montgomery, Ohio. Until I received this email I did not know much about real life escape room games. I did a little research and found the concept intriguing. I’ve heard of escape rooms before, and a friend of mine even had an escape room birthday party, other than that I didn’t really know that much about it. You and your friends are locked into a room with some sort of scenario that needs solving within one hour to “escape the room”. Sounds easy, right? Well, these are not puzzles for children, and even though you are in these rooms and know full well that you can walk out at any time you still feel the pressure of that sixty minutes. It’s intense and fun at the same time, and an awesome way for adults to have a party like no other. You can find escape rooms all around the world, for example, check out this Escape Room in Chicago or another one in your local area. They’re great fun and encourage team work too! If you really loved the escape room experience and you’re looking for something to liven up the office Christmas party or host an evening of family time when the weather gets colder this year, you can now also get your hands on an escape room in a box – they could give you the escape room experience without leaving your own house!

John Kennedy and his family created Houdini’s room escape in Montgomery after they discovered other escape room adventures while traveling. John said that he liked the way that these puzzling rooms got his teenage children to put aside their devices and work together to solve puzzles and escape whatever room they were in at the time. As a parent he was interested to see how each of his children approached the puzzles in their own way and how they worked cooperatively together to figure them out. His children are still his test subjects when he’s designing the puzzles for Houdini’s Room Escape.

There are three escape rooms currently operating at Houdini’s Room Escape, with two more rooms in the making. John designs the rooms and the puzzles within, and there are three levels of difficulty to choose from. We chose “The Lab” which is the medium difficulty room. We had a few reasons for choosing this room, but mostly because it involved Zombies. We did get a sneak peek at the other two rooms, and I have to say I want to make more trips to Houdini’s Room Escape to try the other two out! Below is a brief description of each room as provided by the Houdini’s Room Escape website, I don’t want to give you too many more details about the experience.

The Tower: “Built in 1932, the Carew Tower is a Cincinnati Landmark. Its art deco architecture makes it one of the most beautiful buildings in the country. Its observation deck gives you the best views of the tri-state area. When you enter The Tower, you’ll feel like you are on the observation deck over 500 feet above Cincinnati. Follow the clues as they lead you and your fellow tourists from one puzzle to another. But remember, the last elevator goes down in 60 minutes, so you better hurry!” 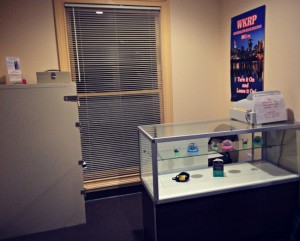 Out of all three rooms I think I liked the decor in this one the best. The attention to detail was amazing. A photographer spent an endless amount of time putting together the panoramic photograph depicting the view from atop Carew Tower. And the gift shop at Houdini’s Room Escape is spot on the actual gift shop at Carew! If you haven’t done so already make a trip to top of Carew Tower and then go to Houdini’s Room Escape to try to catch the elevator in time!

The Lab: “The Z-Virus, a devastating pathogen, has been wreaking havoc on humanity, turning thousands of people across the world into zombies. A group of scientists had recently made a breakthrough in developing a cure, but in the process accidentally contaminated themselves. Lock down procedures have been activated in their lab in order to prevent anyone or anything from escaping. Are you brave enough to volunteer to enter the lab to deactivate the safety protocols and locate the cure that will save all of mankind?” 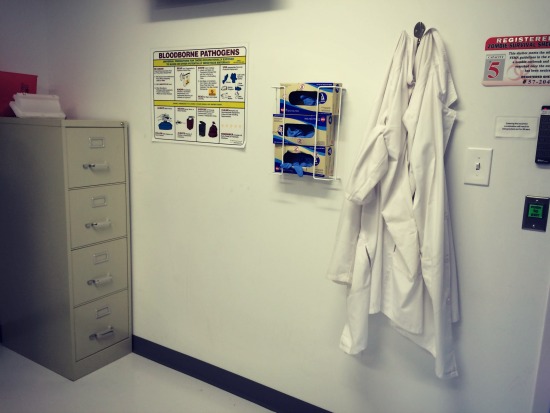 As I mentioned, we did “The Lab” on our visit, and it was loads of fun! I can’t bring myself to tell you how much time we had left, but I will say we made it out by the skin of our teeth! None of us had ever done anything like this, and at first we were fumbling for what to do, but it didn’t take long to get into the groove and start puzzling things out. We ended up saving the world. You are welcome.

Houdini’s Game Room: “Harry Houdini, the world’s greatest magician, is searching for individuals clever enough to become his apprentices. This tremendous honor can not be given to just anyone as his apprentices will learn all the secrets behind his amazing illusions. That is why Mr. Houdini has designed a challenging test, set inside his own home. Only those skilled enough to pass the test by escaping his locked game room while locating his favorite props will be considered for the positions. Are you and your associates capable of successfully challenging the master himself inside Houdini’s game room?” 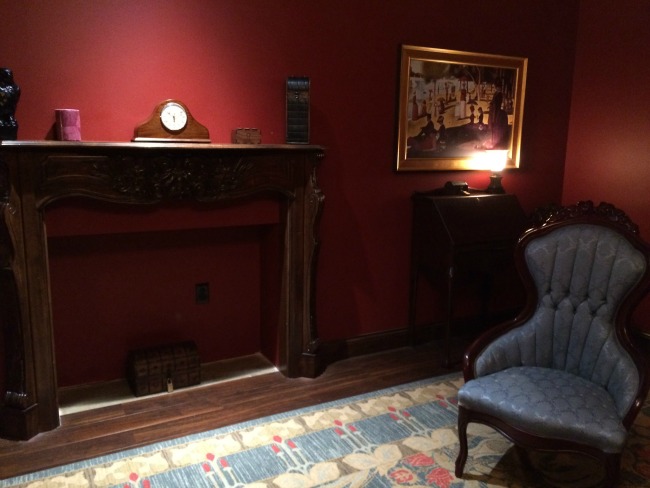 This room is supposed to be the most challenging of the three rooms at Houdini’s Room Escape, and I hope we get a chance to try it some day! When you walk into this beautifully decorated room you almost expect to see Houdini himself lounging in a chair waiting to entertain you. Or help you out of the room. It seems more like a fancy old fashioned parlor than an escape room.

Some things to consider when planning a visit to Houdini’s Room Escape:

Houdini’s Room Escape is located at 9309 Montgomery Road in Cincinnati, just a few minutes away from the Kenwood Towne Center. Visit their website to book your visit and to get more details about this attraction.

Disclaimer: My friends and I were treated to a complimentary visit to Houdini’s Room Escape for review purposes. All opinions in this post are 100% my own as always.