Broadway in Cincinnati presents: The Illusionists 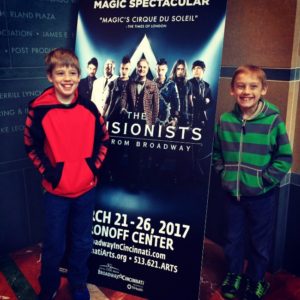 We went to an “epic” magic show tonight at the Aronoff Center, called The Illusionists.  I use the word epic because I was with two young gents who used that very word.  I cannot remember the last time I heard my boys laugh harder than they did tonight.  Not only were our minds blown by the tricks, stunts and illusions, but the performers kept us cracking up with their banter and quips.

We all picked our favorite acts at the end of the night, and I’m not going to tell you which acts they were, because you need to see this show to believe it and pick your own favorites.  I do not want to give anything away by talking about what we loved most in the show.  Truth be told though, I had a really hard time picking a favorite act.  Each performer was quite impressive.  Even that silly Trickster who hosts the show.

The Illusionists are only in town for a few more days, so get your tickets NOW! 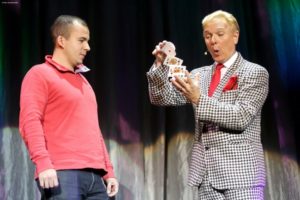 On the heels of a highly successful multi-city tour and run on Broadway, the world’s best-selling touring magic show, THE ILLUSIONISTS – LIVE FROM BROADWAY™ will play the Aronoff Center in Cincinnati March 21 -26 a part of Fifth Third Bank Broadway in Cincinnati’s 16/17 Season presented by TriHealth.  Tickets are on sale now and available at the Aronoff Center Box Office downtown at 650 Walnut Street, online at CincinnatiArts.org or by phone at 513.621.ARTS.THE ILLUSIONISTS – LIVE FROM BROADWAY™ is produced by Simon Painter, Tim Lawson and Magic Space Entertainment. Conceived by Simon Painter, the show’s creative team also includes executive producer Tim Lawson, director Neil Dorward and creative director Jim Millan. Full of hilarious magic tricks, death-defying stunts and acts of breathtaking wonder, THE ILLUSIONISTS has shattered box office records worldwide and thrilled audiences of all ages with a mind-blowing spectacular showcasing the jaw-dropping talents of seven of the most incredible illusionists on earth. 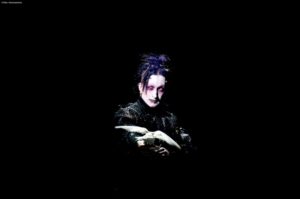 Creative Producer Simon Painter said, “We can’t wait to bring this electrifying show to Cincinnati for a truly entertaining experience for the whole family. THE ILLUSIONISTS is the most non-stop and powerful mix of outrageous and astonishing acts ever to be seen on the live stage.”

The seven stars, each a master in their own field, are:

** The Anti-Conjuror, Dan Sperry: Described as Marilyn Manson meets David Copperfield, Dan combines the art of magic with the macabre and is one of the top-10 most Googled people, thanks to a legendary “America’s Got Talent” appearance.
** The Trickster, Jeff Hobson is the epitome of glamour and showmanship. Don’t be fooled by his innocent appearance; Jeff has audiences laughing long after the curtain goes down.
** The Inventor, Kevin James is known for innovative illusions, is an inventor, comedian and collector of the strange and unusual. Kevin is one of the most prolific inventors of magic in the world and has created some of the most celebrated illusions of the last century.
** The Escapologist, Andrew Basso: Italy’s star escape artist, Andrew considers Houdini his hero and is fast becoming one of the world’s most popular illusionists. He is the only person in the world to perform Houdini’s famous Water Torture Cell with absolutely no covers.
** The Deductionist, Colin Cloud, one of the greatest thought readers of all time is a psychic savant known as a real-life Sherlock Holmes. Don’t play against him in a game of poker – he’s never lost. 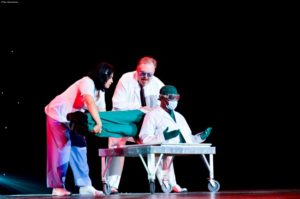 ** The Daredevil, Jonathan Goodwin, is widely considered one of the most creative, skilled, and frankly crazy stunt performers in the world. He is an accomplished knife thrower, archer, escape artist, fakir,martial artist, free diver, and free climber. Unlike the other performers in the show, Jonathan is not a magician or illusionist but he will leave the audience breathless with his death-defying stunts.
** The Manipulator, An Ha Lim: The first place winner at Korea’s Busan International Magic Competition(2006), Italy Club Convention Manipulation (2006) and World Magic Seminar in Asia (2007), An Ha Limwas also a Golden Lion Award winner at the World Magic Seminar in Las Vegas (2008).

THE ILLUSIONISTS – LIVE FROM BROADWAY™ will play the Aronoff Center from March 21 – 26, 2017:Tuesday – Thursday at 7:30PM, Friday at 8:00PM, Saturday at 2:00PM and 8:00PM, Sunday at 1:00PM and 6:30PM. Tickets start at $30. They are available at the Aronoff Center Box Office downtown at 650 Walnut Street, online at CincinnatiArts.org or by phone at 513.621.ARTS. For groups of 10 or more, contact the group sales department at 513.369.4363. Performance schedule, prices and cast are subject to change without notice. For more information, please visit www.BroadwayInCincinnati.com.

Disclaimer:  I was given complimentary passes for media review purposes.  All opinions are 100% my own.  Photographs & Press Release were provided by Broadway in Cincinnati