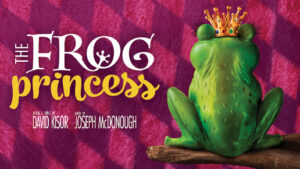 We were in the audience for the opening night of The Frog Princess at Ensemble Theatre  Cincinnati and it was a wonderful way to kick off our holiday season.  The Ensemble Theatre puts on a family friendly musical each holiday season.  And when I say that it is “family friendly” that does NOT mean that it is JUST a kiddie show.  The parents were equally as enthralled and entertained as the children during this performance.  I have been recommending it to friends and family left and right ever since we saw the show. 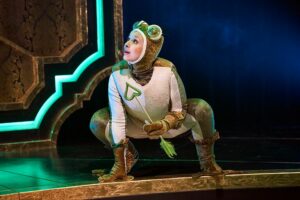 The team behind the creation of The Frog Princess in 1997 is playwright John McDonough and composer David Kisor.  They dreamed up this fairy tale and brought it to life with a whimsical and sometimes downright wacky storyline and music.  Going in I thought it would be a story quite similar to another fairy tale with a similar name – but it is NOT.  This is a a unique and intriguing fairy tale unlike any other fairy tale I have ever heard.   I laughed out loud more times than I can count and danced a little in my seat.  And we were all singing one of the catchy songs from the play in the car on the way home that night.  Everything about this play from the story to the music to the performers to the costumes to the set was just delightful.

Because Ensemble Theatre is a small theater it makes the audience feel like they are up close and personal with the performers, like we were practically a part of the show.  The Frog Princess moves at a quick pace and the storyline is highly entertaining and teaches many lessons about kindness throughout, so it is perfect for all ages.   Going to see the Frog Princess would be a memorable family experience this holiday season and I highly recommend it!  Make a day of it and enjoy dining out in Over the Rhine.  Read below for more details about this show and visit the Ensemble Theatre of Cincinnati website to find out more about the show and purchase tickets.

HOP INTO THE HOLIDAY SEASON! 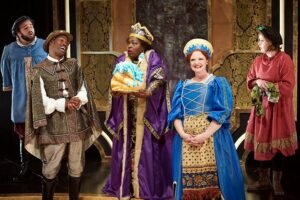 The ribbit-ing return of Ensemble Theatre’s first commissioned family-friendly musical, The Frog Princess, leaps to the stage December 4, 2019-January 4, 2020. This musical spin on the beloved classic Russian fairy tale celebrates the beauty within each of us and receives a contemporary twist by local creative team Joseph McDonough  (playwright) and David Kisor (composer and lyricist). This year’s production is the first time it will have appeared on the ETC stage in twelve years. With a revitalized script, intricate costumes,and a lavish set, The Frog Princess is holiday fun for the entire family! Directed by D. Lynn Meyers. 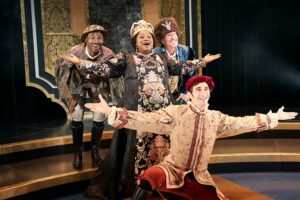 It is time for Prince Ivan to marry, but when he discovers his bride-to-be is actually a frog, he is toad-ally disappointed. Vasilisa is more than your typical hoppy-go-lucky frog, though…she’s a kindhearted princess under a curse! When the villainous Old Bones takes Vasilisa to a far-away land, Ivan sets out to find her,  discovering along his journey that love sees beyond outside appearances. “The driving theme of this show is kindness–it’s about non-judgment, not leaping (if you mind the pun) to conclusions, and being kind to one another,” says Producing Artistic Director D. Lynn Meyers. “We can all agree that kindness is something we need more of in the world we live in, and I think that this story reaches deeply into the idea of loving, caring, and accepting one another. I am so excited to be bringing The Frog Princess back to the stage, and to bring kindness and joy to audiences this holiday season.” 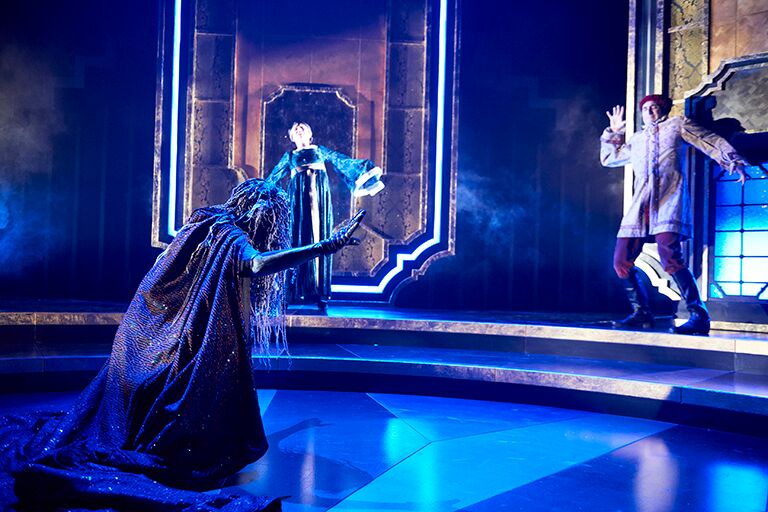 If you plan on making a day of it when you go to see The Frog Princess visit my Restaurant Archives for ideas on where to dine around town.

Disclaimer:  I was given complimentary tickets to see The Frog Princess  for review purposes, but all opinions are 100% my own.