The Lion King on Broadway may just be one of my all time favorite productions that Broadway in Cincinnati has brought to town.  The show was breath-taking and entertaining from start to finish.  Last week I took my son Sam to see The Lion King and it was the first time either one of us had seen it.

I did not know what to expect, because I had not read or heard much about the show before hand because the holidays kept us busy so I missed all the hub bub surrounding the show.    I was BLOWN AWAY.  I have seen many a Broadway production, but The Lion King was a show like no other.  Every single aspect was phenomenal, the performers, the music, the dancing, and the use of the space in the theater.  If you think that going to see The Lion King will be just seeing a theatrical performance of the Disney movie you are WRONG.  This show had me laughing, singing, and covered in goosebumps at times.   The Lion King was one of my favorite Disney movies of all time, and this production brought the show to life in a way I never imagined they could. 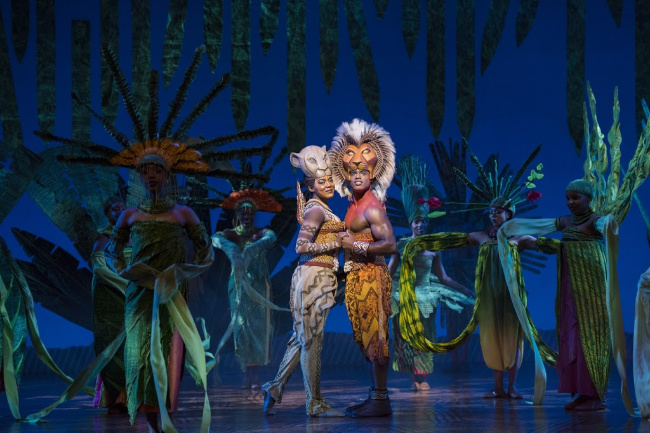 Whether you are a Broadway regular or you have never been to a show, this is the ONE friends.  Get tickets NOW.  Run don’t walk, thank me later for the recommendation.

The Lion King presented by Broadway in Cincinnati 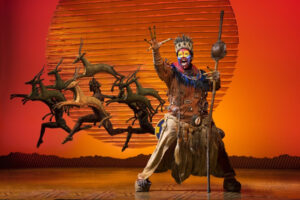 After 21 landmark years on Broadway, The Lion King continues ascendant as one of the most popular stage musicals in the world.  Since its premiere on November 13, 1997, 25 global productions have been seen by more than 100 million people.  Produced by Disney Theatrical Productions (under the direction of Thomas Schumacher), The Lion King has made theatrical history with three productions worldwide running 15 or more years and three others running 20 or more years. 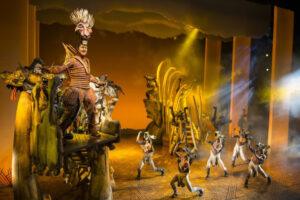 The show’s director, costume designer and mask co-designer Julie Taymor continues to play an integral part in the show’s ongoing success.  The first woman to win a Tony Award for Direction of a Musical, Taymor continues to supervise new productions of the show around the world.

The Broadway score features Elton John and Tim Rice’s songs from the Lion King animated film along with three new songs by John and Rice; additional musical material by South African Lebo M, Mark Mancina, Jay Rifkin, Julie Taymor and Hans Zimmer; and music from “Rhythm of the Pride Lands,” an album inspired by the original music in the film, written by Lebo M, Mark Mancina and Hans Zimmer.  The resulting sound of The Lion King is a fusion of Western popular music and the distinctive sounds and rhythms of Africa, ranging from the Academy Award®-winning song “Can You Feel the Love Tonight” to Lebo M’s rich choral numbers. 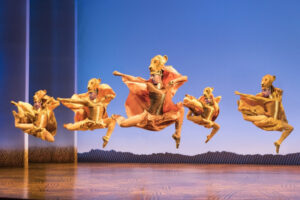 Performance dates & times are: Tuesdays – Thursdays at 7:30PM, Thursday, January 9 at 1:00PM, Fridays at 8:00PM, Saturdays at 2:00PM and 8:00PM, Sundays at 1:00PM and 6:30PM. Performance schedule, prices and cast are subject to change without notice. For more information on additional shows in the Fifth Third Bank Broadway in Cincinnati season presented by TriHealth please visit BroadwayInCincinnati.com.

Tickets are available via lionking.com, CincinnatiArts.org, by phone at 513.621.ARTS, and the Aronoff Center Box Office. VIP Ticket Packages, which include a prime seat location, a commemorative souvenir program and an exclusive merchandise item, are also available. Groups of 10 or more may reserve seating by calling 513.369.4363.

Disclaimer:  I was given complimentary tickets to see The Lion King for review purposes, but all opinions are 100% my own.