My friend Lisa shared a very special recipe with me, and she has given me permission to share this recipe with my readers.  The 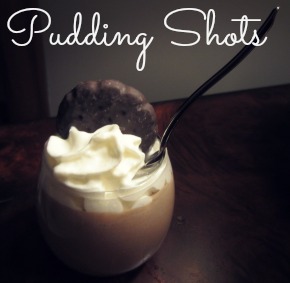 recipe is for Pudding Shots.  What’s a Pudding Shot you ask?  Well, it’s part dessert, part cocktail.  It’s a perfect treat to make and take to a party, or in Lisa’s case, to a Bengals Tailgating Party.  Apparently she’s famous for them.  When she started posting about pudding shots on Facebook I became intrigued.  I like pudding.  And I like cocktails.  Seems like the perfect sort of dessert to me.  I now love to make them (and eat them) and I have been know to show up to parties with a tray of pudding shots in hand.  They are an especially nice treat at Bridal Showers.  Say goodbye to Mimosas and hello to Pudding Shots!  You can dress the shots up by using fancy small glasses and adding garnishes such as whipped cream, small cookies, fruit or something of that sort.   The Pudding Shot pictured here is a “Thin Mint” shot made with chocolate pudding & Peppermint Schnapps and topped with whipped cream and a Thin Mint.  Although I should point out that for these shots I didn’t add enough Cool Whip to the mixture, so they were a bit runny.  Lesson learned, always add enough Cool Whip.  These Pudding Shots are pretty easy to make, and always popular with the crowds.

See a list of Pudding Shot combinations below the recipe, and feel free to leave your own ideas for the perfect combination in the comments below.


And here’s a picture of the lovely dessert glasses from my Mama: 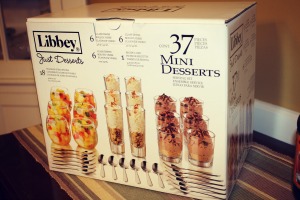