Broadway in Cincinnati presents EVITA at the Aronoff 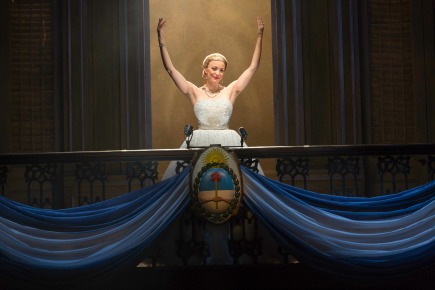 This week I was given the opportunity to go to the Aronoff Center to see the Broadway musical Evita.  It was a stellar show…three 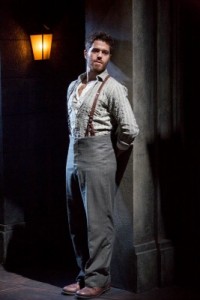 days later I’m still singing the songs from the show everywhere I go.  You may be thinking to yourself, “Oh I’ve seen that movie, why should I go see it at the theater?”.  And my answer would be that a live stage performance of Evita is so much more passionate and beautiful than watching it on DVD.  The entire cast was fantastic, but the stars of the show were downright phenomenal.  Josh Young as Che and Caroline Bowman as Evita brought this tale to life and made the audience feel as if we were living through this era in history.  And I was quite impressed that both Josh and Caroline sang for the majority of this performance and did not seem to tire.  Their voices were as strong and magnificent at the end as they were at the beginning of the show.  That being said, Evita was in declining health towards the end of the show, so Caroline’s singing was supposed to be a bit softer, but it was still every bit as beautiful. I’d also like to mention Krystina Alabado, who played the Mistress of Peron, she has only one scene and she sings only one song (Another Suitcase in Another Hall), but it was so poignant and tender, and her voice was beautiful. 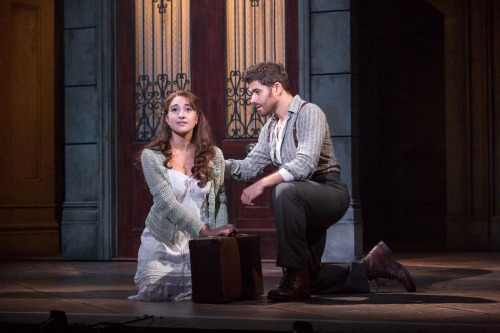 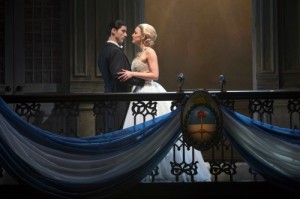 I will warn you, Evita takes you from one extreme to the next…one minute you adore Evita and the next you find her scheming and manipulations abhorrent.  You will admire her for caring for the lower class of her country and for her determination and strength, and then you will judge her for sleeping her way to the top.  I was so conflicted!  But when she stands on her balcony and sings “Don’t Cry for Me Argentina” I was able to forgive her slights.  And after seeing the show I was eager to learn more about Eva Peron and Argentina. 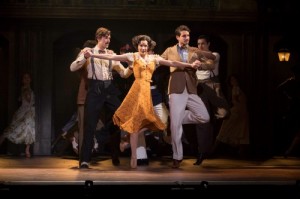 Eva Perón used her beauty and charisma to rise meteorically from the slums of Argentina to the presidential mansion as First Lady. Adored by her people as a champion for the poor, she became one of the most powerful women in the world — while her greed, outsized ambition and fragile health made her one of the most tragic. EVITA tells Eva’s passionate and unforgettable true story, and features some of theater’s most beautiful songs, including “Don’t Cry for Me Argentina,” “Another Suitcase in Another Hall” and “High Flying, Adored.”

EVITA will play the Aronoff Center from February 18 – March 2, 2014: Tuesday – Thursday at 7:30PM, Friday at 8:00PM, Saturday at 2:00PM and 8:00PM and Sunday at 1:00PM and 6:30PM. Tickets for EVITA start at $28. They are available at the Aronoff Center Box Office downtown at 650 Walnut Street, online at CincinnatiArts.org or by phone at 513.621.ARTS. For groups of 10 or more, contact the group sales department at 513.369.4363. Performance schedule, prices and cast are subject to change without notice. For more information, please visit www.BroadwayInCincinnati.com. 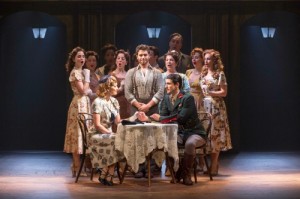 Evita will only be here for a short time, so do not miss your chance to see this spectacular Broadway show, get your tickets today!  This show would make for a great date night or if you can’t get out for a date take your girlfriends and go!  I took my good friend Nicole, and we were both so happy to escape the madness of our homes for an evening and immerse ourselves in culture…music, lights, dancing, singing, and cocktails.  What could be better?

Disclaimer:  I was given tickets to see Evita for review purposes, but all opinions are 100% my own.  Thank you so much Broadway in Cincinnati for sharing these tickets with me!

Photo Credit: All photos were provided by Broadway in Cincinnati and taken by Richard Termine