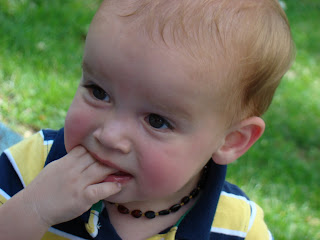 Poor Prince Henry is teething, AGAIN. It seems that when he teethes they come in large numbers. I have had a number of people ask me about his necklace, and I’m more than happy to tell all the parents I can about it! His necklace is Baltic Amber, and it is supposed to relieve pain associated with teething. I have been asked repeatedly if i think it works, and the answer is yes. I was skeptical at first, but so many friends were singing the praises of the amber necklaces, and I was willing to try anything to make teething easier for him. Right now he has at least 3 teeth coming in (he doesn’t let me in there to check things out very often). He can get a little cranky sometimes, and that might be due to the teeth coming in, but I have not had to give him meds at all because of the teething. It won’t be long before he will have all of his baby teeth (I’m hoping with less pain). And when that time comes, I will have to make a dental appointment for him, preferably with a pediatric dentist as they will probably know how to check a toddler’s teeth in the right way. My friend took her child to a Pediatric Dentist in Vineland and she said they were very good at giving children check-ups and treatments, so I think this has persuaded me to go to a similar one in our area. In the meantime though, I will have to try and manage his current teething pain before thinking too far ahead. When his first two teeth came in (before we bought the necklace) it was a nightmare, and he cried for two days straight. So comparing that experience to this one, I’d have to say the amber is soothing him. You can find Baltic Amber necklaces on Etsy, at Toko Kidz in Clifton and Park+Vine in Cincinnati and other shops. I found my experience at Park + Vine to be the most helpful because they talked to me about proper fitting and other benefits of Baltic Amber.
These necklaces are for wearing, not for chewing, and even if they aren’t relieving pain (which I believe it is) – it’s still a cute little necklace, for a boy or a girl. The necklaces should be removed when the child is sleeping, and I also take it off for swimming and bathing. I would also recommend, that if your child is really struggling with teething pains, that you consider taking them to visit a dentistry office, like dentist Milltown or similar. They will give you advice on how you can help your child. Anyway, let me know if you use these baltic amber beads, and what you think about them!

***Update – three years later I am still singing the praises of Baltic Amber. Over the years we saw the impact the amber had on Henry. One instance comes to mind…Henry had FOUR teeth coming in and his necklace broke (the necklaces are made with a knot between each bead, so the beads don’t scatter if the necklace breaks). This was his first necklace that we bought on Etsy. Immediately Henry’s temperament changed and he was crying and miserable. This went on for two days until I made it to Park + Vine to replace the necklace. Then he was soothed. Michael and I have been recommending them to parents ever since. And even though Henry isn’t teething right now he still insists on wearing his necklace.