Kocanut Joe’s Frozen Yogurt has a new product on the market, just in time for these hot summer days!  They now make frozen yogurt popsicles!  Since our family is a 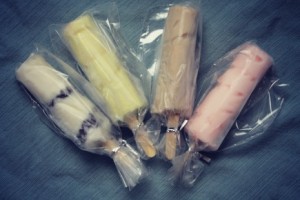 friend of KoJo’s and I’m always promoting them on social media we were given a few popsicles to take for a test drive.  We were given four different flavors to try (the flavors will rotate as the frozen yogurt flavors change in the store).  We were given Vanilla with assorted Boba balls, Caribbean Colada, Sea Salt Carmel Pretzel, and Pink Lemonade.  Before handing the pops over to my four munchkins I sliced a piece off the top of each one so I could do an official taste test myself.  I have to say, they were all scrumptious.  My favorite was probably the Sea Salt Caramel Pretzel, because that’s always my favorite flavor to eat when we dine on frozen yogurt at Kocanut Joe’s.  Pink Lemonade was a perfect summertime flavor though and made me think it’d be perfect for eating at the pool.  Or Caribbean Colada…another perfect summertime flavor.  And the Vanilla was tasty too.  See…I can never just pick one thing. Nevermind what I think about them though, listen to what my kids have to say about the Kojo Froyo Pops…

Ella enjoyed the Pink Lemonade Kojo Pop and she said that it “Tastes like summer“.  You can tell from the picture she was pretty tickled about this treat! 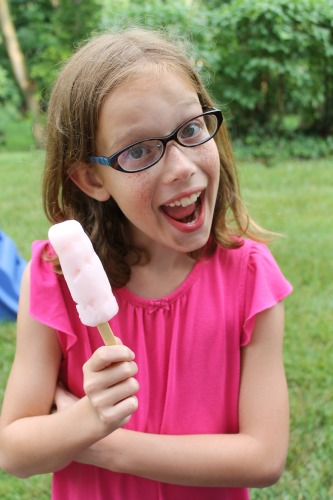 Sam had the Vanilla Kojo Pop, and as always he was a boy of few words:  “This is AWESOME!” 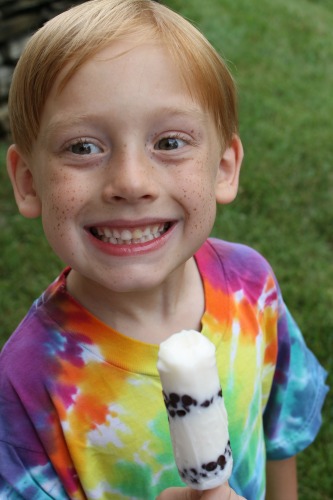 And Henry had the Carribean Colada Kojo Pop.  He was too busy eating to say much about it, but he did give it a thumbs up! 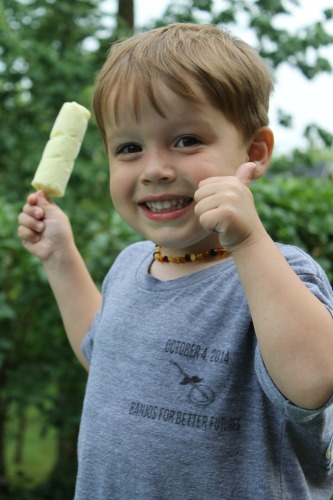 I didn’t get a good picture of Max and his Sea Salt Caramel Pretzel Kojo Pop, but he all he said was “I just want MORE!!!”.  I understand that sentiment, as he ate my favorite of the Froyo Pops.

For more information on Kocanut Joe’s Frozen Yogurt, visit their Facebook page and then get yourself there for a cool summer treat!

Disclaimer :: We were gifted a set of Froyo Pops to try at home from Kocanut Joe’s.  The opinions are 100% my own (and my children’s in this case).