Labyrinth Costumes for the Whole Family 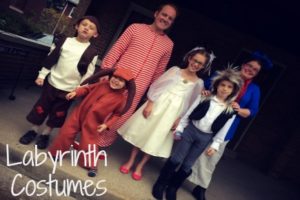 Since my children were very small we have dressed them up for Halloween in a coordinating theme.  Sometimes Michael and I even join in on the fun and dress up with them.  The kids get really excited about the planning, secrecy and implementation of our Halloween Costumes each year.  We have been characters from Scooby Doo, The Wizard of Oz and Harry Potter.  This past year was my favorite theme ever though…we were the characters from one of my all time favorite movies, Labyrinth.  Creating Labyrinth costumes was no easy feat, considering that the great Jim Henson had created some of the characters in the show.  We did our best on a shoestring budget and made some pretty cool Labyrinth costumes with what we had on hand and could find at decent prices.

Labyrinth Costumes for the Whole Family:

Max played the lead role of Jareth on Halloween.  People who were unfamiliar with the movie thought that he was Rod Stewart…but I thought he played a perfect Bowie/Jareth.  We bought his wig and vest on Amazon and he wore a white dress shirt from Once Upon a Child with a pair of grey leggings.  The boots were his Mama’s. 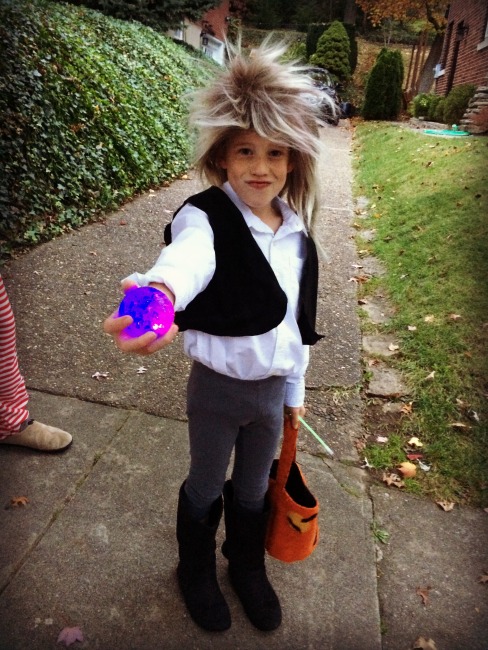 Ella played the part of Sarah for the evening….from the masquerade ball scene of the movie.  We took an old Flower Girl dress and asked Michael’s Godmother (a very talented seamstress) to add sleeves.  We added a few  frilly hair pieces and a sparkly costume jewelry brooch and she was gorgeous and ready to go! 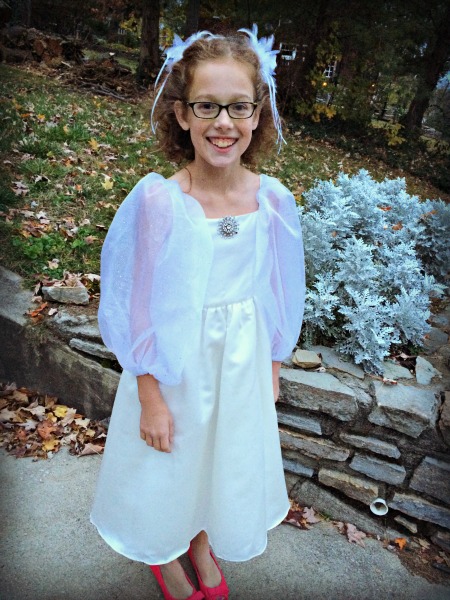 Sam dressed as everyone’s favorite grouch…Hoggle.  Michael made him some simple fleece pants and I sewed some patches on to them.  He also made him a hat out of brown fleece.  We found a cheap white long underwear shirt and a vest on Amazon and boom…costume made! 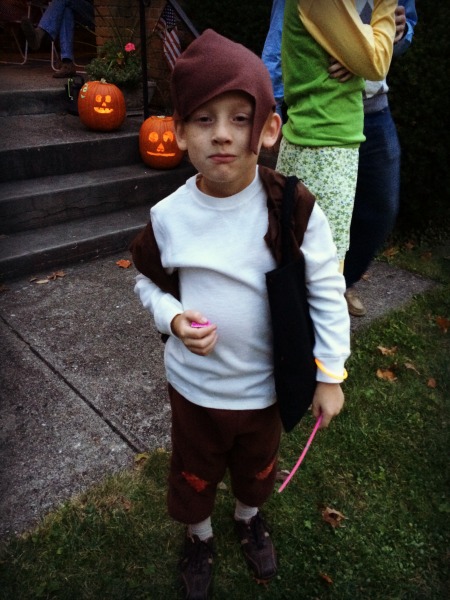 Henry…oh dear Henry.  He insisted from the beginning that he wanted to play the part of the gently furry giant Ludo.  Michael took the challenge on and modified an online sewing tutorial for a wolf costume into a Ludo costume out of orange fleece. 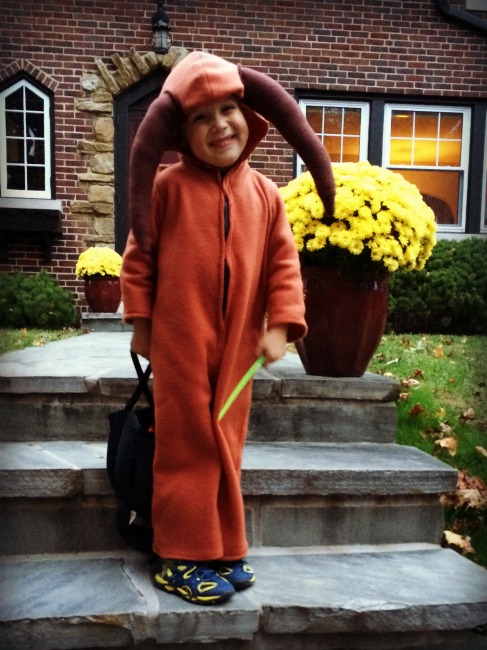 Look at my husband hard at work…. 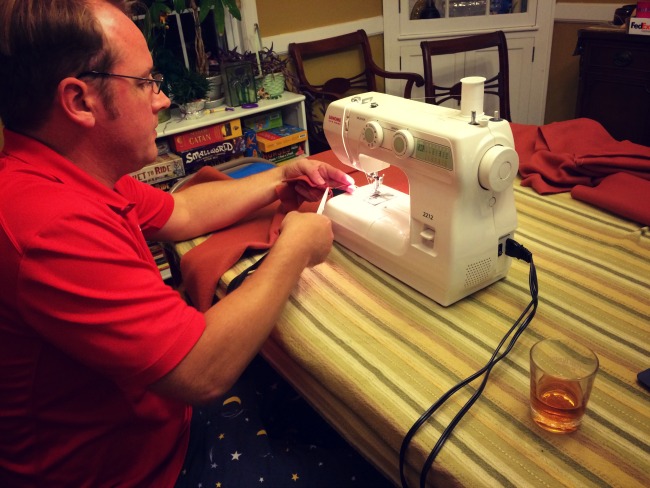 For the piece de resistance we convinced Michael that he should play the role of Toby….a baby.  I found him some red and white striped footed pajamas at Target and he used some yellow hair spray to make himself blonde for the evening.  Here’s baby Toby on Jareth’s lap: 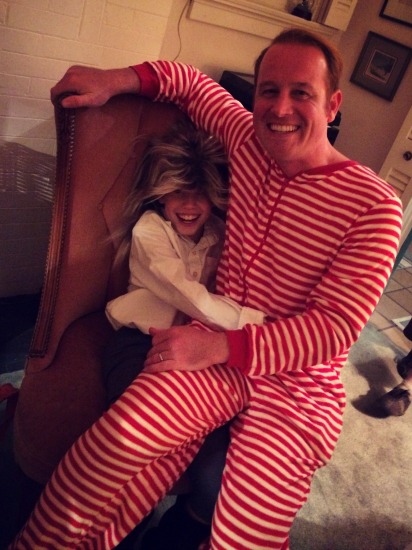 As for me….I was so busy putting together everyone else’s costumes that mine was put together in a hurry.  I was the tiny little inchworm that said “Ello!”  I had a red scarf, blue shirt and a crazy headband from a local party store.  Here we are all together… 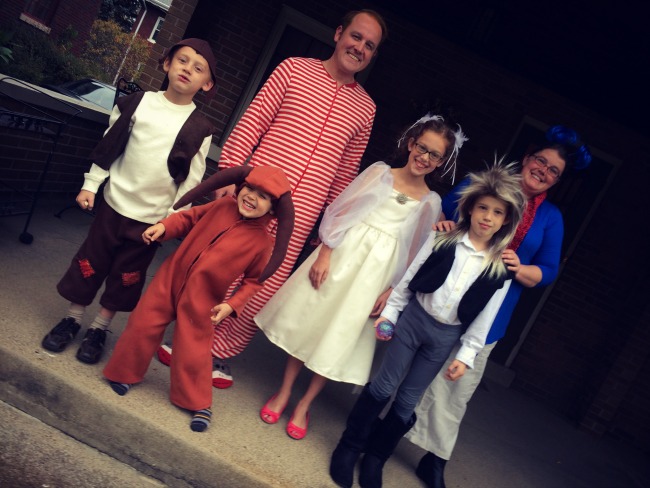 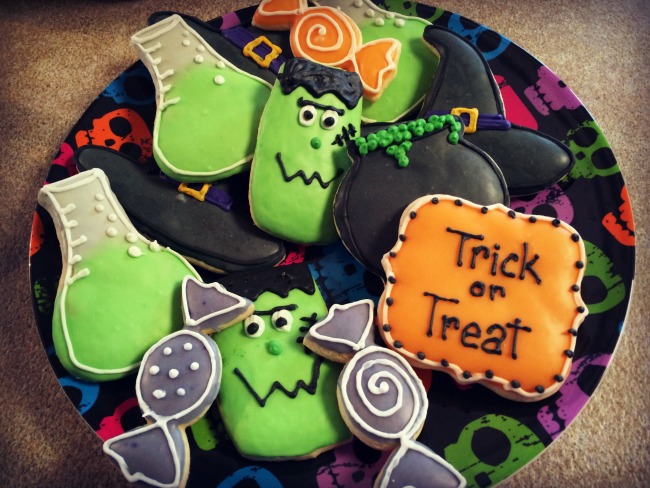 Our cute cousin Will as Anger: 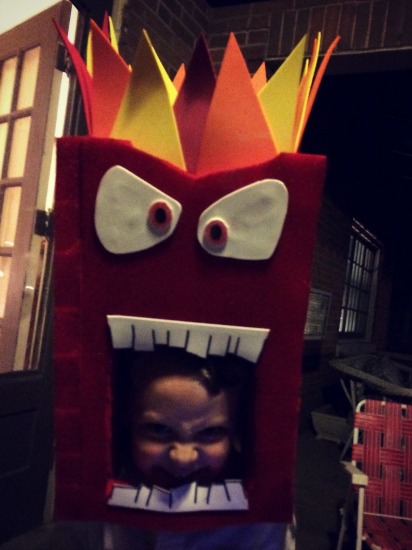 Joy, a Pirate Wench and a photobomber… 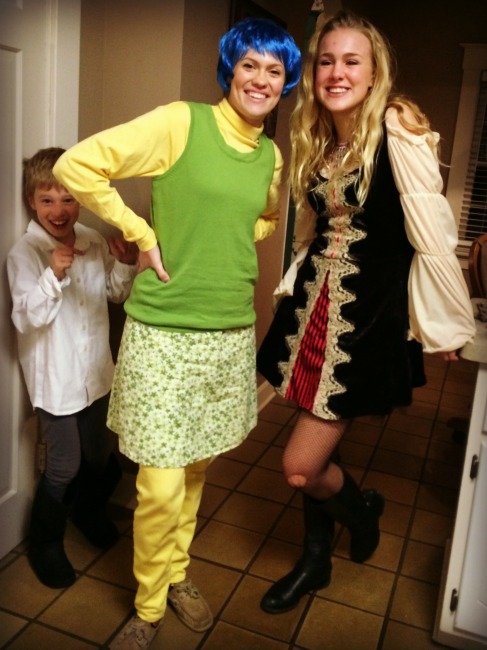 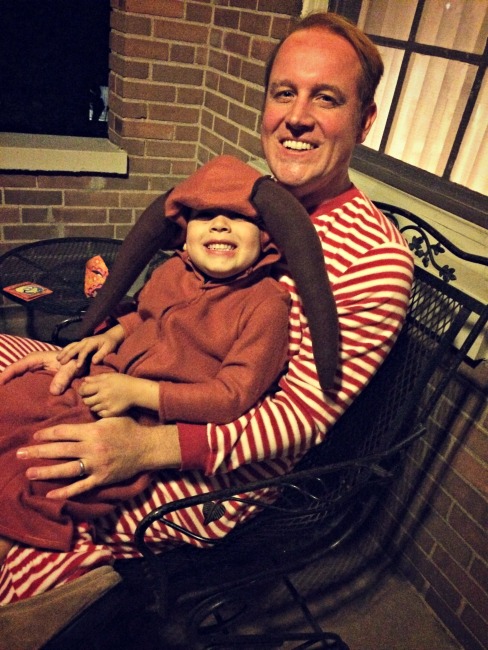 If you are reading this and wondering what this movie Labyrinth is that I speak of, please go find it and watch it!  Here’s the Trailer from way back in the day (30 years ago!):