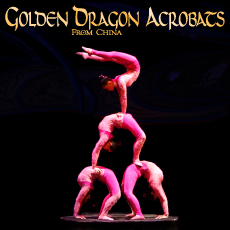 The Golden Dragon Acrobats are Coming to the Aronoff:

The Golden Dragon Acrobats represent the best of a time-honored tradition that began more than twenty-five centuries ago. The company’s reputation is solidly rooted in a commitment to the highest of production values and an attention to artistic details that is unparalleled in the art form. World-renowned impresario Danny Chang and choreographer Angela Chang combine award-winning acrobatics, traditional dance, spectacular costumes, ancient and contemporary music, and theatrical techniques to present a show of breathtaking skill and beauty. 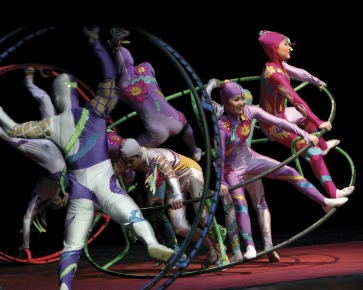 Performing feats on chairs stacked ten-stories high, the troupe has traveled to all fifty states and to more than sixty-five countries on five continents. The Golden Dragon Acrobats have received two prestigious New York Drama Desk Award nominations for its Broadway performances. A five-week run at Broadway’s New Victory Theater in 2014 marked the only time an acrobatic troupe from China was chosen to perform twice at this prestigious venue.

The ancient art of acrobatics has developed into one of China’s most popular art forms. As well as evolving into many forms of performance – dance, opera, martial arts, and sports – acrobatics has served an important role in the cultural exchange between China and Western nations. The citizens of China continue to present their acrobatic art for the world today, in order to portray their hard-working nature and set forth an example of the rich traditions of Chinese culture.

“When the Golden Dragon Acrobats come to town, the wonders stack up,” reviewed The New York Times. “Cathedrals of contortionists in backbend rise before your eyes, body by body. Human obstacles, which tumblers flip over, widen in person-size increments. The thrill is escalation. These touring acrobats from China know how to keep topping themselves.”

The Giveaway Details ::
The winner will receive four tickets for the Golden Dragon Acrobats show at the Aronoff Center for the Arts in Cincinnati.  The show is on Tuesday, March 6th 2018 at 7:30pm.   The tickets will need to be picked up at Aronoff Box Office.   I will draw one random winner on Monday, February 26th at 8pm.  The winner will be emailed and have 24 hours to contact me via email or another name will be drawn. Please be sure you are available for the show on this date before entering the giveaway.  You have five chances to get your name in the drawing!

How to Enter (answer this question):1.  Who would you take to this show and why?

The following entries are optional BONUS entries!
IN ORDER FOR BONUS ENTRIES TO COUNT YOU MUST LEAVE A SEPARATE COMMENT FOR EACH ENTRY!
2. Check out  The Little Things Blog  on Facebook, and then leave a comment below telling me that you did so.
3.  Share this giveaway with your friends on Facebook, and be sure to tag “the little things blog” and in your post!  Leave a comment telling me you shared.
4.  Tweet about the giveaway!  Make sure you add @LittleThingsMom and @CincinnatiArts in your tweet!  And then comment below telling me you did so.
5.  Follow along…sign up for Email Newsletters for this blog (upper right hand corner of this blog) and then leave a comment telling me you did so.  Or if you follow along another way then tell me that.
Disclaimer:  Tickets were provided for myself and my family, but all opinions are 100% my own as always.
Tags: Aronoff Center for the Arts, Golden Dragon Acrobats
Previous postListermann Brewing Company Next postBroadway in Cincinnati Presents School of Rock