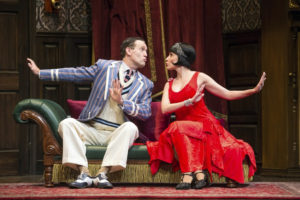 I read up on the show before we went and all the reviews were raving.  We went in with no idea what to expect and came out exhausted from laughing.  The slapstick comedy in the Play That Went Wrong is just too much.  A few times I laughed so loudly that I was sort of embarrassed but then I realized it was the whole audience cracking up, not just us.  We loved it so much that we came home and bought two tickets as a birthday gift for my mama.  Start planning a fun weekend and grab some tickets to this hilarious show.  If you have already seen it I would love to hear your thoughts in the comments! 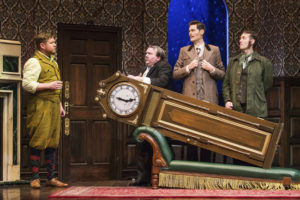 THE PLAY THAT GOES WRONG, the hilarious Tony Award-winning hit Broadway comedy, will make its Cincinnati debut at the Aronoff Center, November 27 – December 2 as a part of the Fifth Third Bank Broadway in Cincinnati 18/19 Season presented by TriHealth. Tickets are on sale now at the Aronoff Center box office downtown at 650 Walnut Street, online at CincinnatiArts.org or by phone at 513.621.ARTS.

Co-written by Mischief Theatre company members Henry Lewis, Jonathan Sayer and Henry Shields, THE PLAY THAT GOES WRONG is a riotous comedy about the theatre. The play introduces The ‘Cornley University Drama Society’ who are attempting to put on a 1920s’ murder mystery, but as the title suggests, everything that can go wrong…does, as the accident-prone thespians battle on against all odds to get to their final curtain call.

Entertainment Weekly calls THE PLAY THAT GOES WRONG “Hilarious! Non-stop pandemonium.” The Huffington Post calls it “The funniest play Broadway has ever seen!” And the New York Post says it’s “Broadway’s funniest and longest-running play! Nothing is as fall down funny. GO.”

The Broadway production of THE PLAY THAT GOES WRONG opened at the Lyceum Theatre on April 2, 2017. The show, which was slated to close on Broadway in August of this year, will extend its run due to popular demand through January 6, 2019. By then, the Broadway production will have played 27 previews and 745 performances, making it the 2nd longest running show in the history of the Lyceum Theatre. THE PLAY THAT GOES WRONG received a Tony Award for Best Set Design, Broadway.com’s Audience Choice Award for Best Play, and the Theater Fans Choice Award for Best Play. 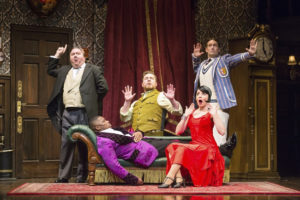 Awarded the 2015 Olivier Award for Best New Comedy, 2014 WhatsOnStage Best New Comedy and 2015 UK Broadway World Best New Play Awards, THE PLAY THAT GOES WRONG  is now in its fourth year in the West End, is currently on a 30 week UK tour and playing on six continents. The producers have avoided Antarctica for fear of a frosty reception.

It is a remarkable rags-to-riches story for a play which started its life at a London fringe venue with only four paying members of the public at the first performance, and has gone on to play to an audience of over 2 million people around the world.

THE PLAY THAT GOES WRONG will play the Aronoff Center from November 27 – December 2, 2018: Tuesday – Thursday at 7:30PM, Friday at 8:00PM, Saturday at 2:00PM and 8:00PM, Sunday at 1:00PM and 6:30PM. Tickets start at $31 and are available at the Aronoff Center Box Office downtown at 650 Walnut Street, online at CincinnatiArts.org or by phone at 513.621.ARTS. For groups of 10 or more, contact the group sales department at 513.369.4363. Performance schedule, prices and cast are subject to change without notice. For more information, please visit www.BroadwayInCincinnati.com. 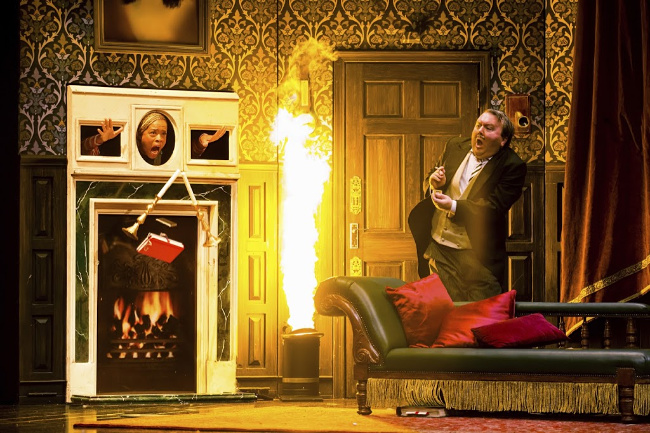 Disclaimer:  I was given complimentary tickets to see The Play That Went Wrong for review purposes, but all opinions are 100% my own.