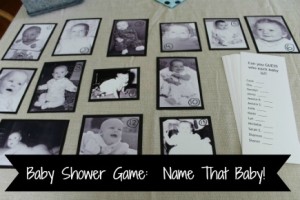 Are you hosting a Baby Shower anytime soon?  I have a simple Baby Shower Game for you to play at the party, it’s fun and gets the guests talking.  It’s called “Name That Baby!”.  The premise is simple, have the party guests look at baby pictures of other guests and take guesses at who is who.  It can get pretty interesting!

This game is easy to put together, but can take some time to collect pictures, so don’t wait until the last minute to work on it.  In fact, I sometimes even start the preparations as soon as the invitations for the party go into the mail.  This DIY Baby Shower Game is sure to be a crowd pleaser!  Plus it’s always fun to go through old pictures… 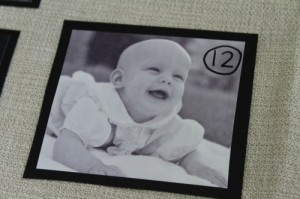 This is honestly the hardest part of the entire project, but it’s totally worth it.  There are a couple ways to go about collecting the pictures.  I have sent a small note inside of the envelope with the invitation explaining that I’m collecting pictures and asking folks to either scan and email me a picture of themselves as a baby or to drop off a photo to me that I can scan and return to them at the shower.  Many people (myself included) own printers that have scanners attached, but if not, you can always copy the pictures at your local Walgreens.   If you can’t collect a picture from each guest, that’s ok, I’ve never had 100% participation in this project.  Another way I’ve contacted everyone to ask for pictures is just to email everyone on the guest list, if I’m not the one sending out the invitations.   I usually tell people that the rule of thumb is to send a picture of themselves when they were younger than one.  This ensures that everyone will have that little baby face.  Exceptions can be made though, my grandmother could only find a picture of herself as a toddler, and it was adorable, so how could I say no??  I should also note, that I save all of these pictures from party to party in a file on my computer so I can re-use them if we ever have a baby shower with some of the same guests (believe me, people will forget who is who, so you can get away with playing this game more than once in the same family/friends group).

I use a free online software (Picmonkey) to edit my baby pictures so that they are black and white.  This makes the game a bit harder because it makes it more difficult to distinguish ages and eras when all of the photos are black and white and none in color.

Printing the pictures is pretty simple, you just upload them to a website that prints photos, such as Shutterfly, Winkflash, or the like and place your order.  There are lots of photo printing deals to be had, so keep your eye on those websites for a few weeks to see if you can score a low price on printing. 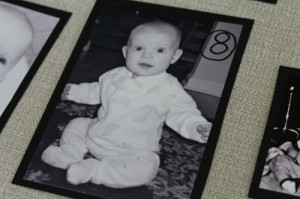 I’ve put my baby picture collection on poster boards, tri-fold boards, and most recently I simply backed them with black cardstock.  This is only to make them look a little fancier so you are not just handing around a stack of photos.  You will also want to number each picture, I did so with a sharpie marker.

To complete the game, just print a list of names of each of the babies, along with a space next to the name where the appropriate number can be written.  You should also print yourself a “Key” so you know who each baby is, because I’m one that always forgets who one of the babies is.

Playing this game is so easy, at the party just put the pictures and papers in a prominent place and as the party progresses just spread the word so that everyone knows to take a turn at the “Name That Baby” game.  I usually offer a small prize for the guest who has the most correct answers (usually Cards by Katie note cards) and I announce the name of each baby to the crowd when everyone assembles for the present opening part of the baby shower.  I love all of the laughter and fun that ensues with this game. 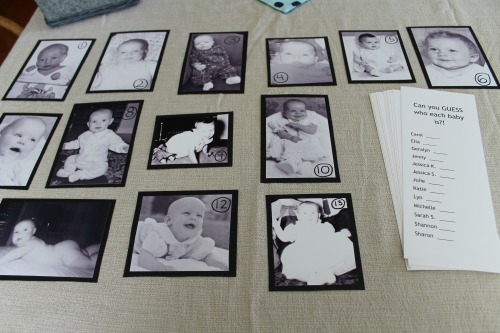 What is your favorite baby shower game?  Comment below, I’d love some new ideas!